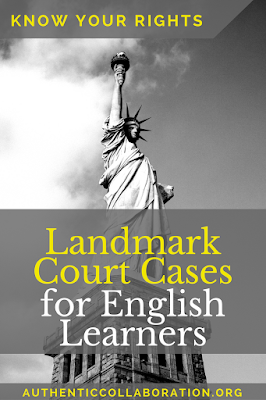 In order to be an effective advocate for students and their families, it is important to understand the basic rights established by our courts. The following court cases represent some of the most significant decisions made with regards to students with a home language other than English.

Brown v. Board of Education (1954)
The case of Oliver Brown et al v. Board of Education of Topeka, Kansas may arguably be one of the most well-known Supreme Court rulings related to education. The case centered on Oliver Brown’s request to enroll his daughter Linda in the nearby elementary school. At the time, schools in Kansas were legally segregated and Linda was forced to walk a more than a mile to the nearest black school instead of the much closer whites-only school. When their request was denied, the Browns joined with twelve other black families to file a class action suit against the school board. The case eventually reached the Supreme Court which ruled unanimously in favor of the Browns, overturning Plessy v. Ferguson (1896) which set the separate but equal precedent almost six decades earlier. This case made it clear that “separate educational facilities are inherently unequal” and made racial segregation illegal in schools across the country.

Lau vs. Nichols (1974)
What does “equal educational opportunities” mean? For Kinney Kinmon Lau and hundreds of other Chinese-American students integrated into the San Francisco Unified School District (SFUSD), the lack of language learning supports was a clear violation of Title VI of the 1964 Civil Rights Act. Many of these students were placed in Special Education or remedial classes and had to repeat grade levels. Lau’s family filed suit against several officials in the school district, including Alan Nichols, president of the SFUSD. School officials argued that all students in the district were educated under the same policy and with the same resources, therefore there was no intentional discrimination. The Supreme Court ruled unanimously in favor of Lau, establishing the precedent that identical educational opportunities are not equal educational opportunities. Teachers and schools must provide affirmative support for students’ English language development and districts must take “appropriate action” to ensure that students’ language learning is not a barrier to equal classroom participation.

Rios vs. Reed (1978)
What then constitutes ‘appropriate action’ with regards to language services for emerging bilingual children? For families of Puerto Rican students enrolled in the Pastchogue-Medford School District of New York, English-only courses were not the answer. The plaintiffs in this case, including Rosa Marie Rios, argued that that the districts’ transitional bilingual program was inadequate and that district staff lacked the knowledge of appropriate bilingual teaching methods. The defendants, including school officials and members of the board of education, denied the allegations and asserted that their programming was in compliance with statutory mandates. The case found its way to the United States District Court of New York, which ruled in favor of the plaintiffs, setting the precedent that states and districts must develop valid assessment procedures for both the identification and program placement of English Learners as well as ensuring that students have access to content education in every stage of English language development.

Castañeda v. Pickard (1981)
What determines whether or not a school district is in fact taking appropriate actions to meet the needs of English Learners? Roy Castañeda, a father of two Mexican-American students in Texas, brought this issue to the table when he filed suit against the Raymondville Independent School District (RISD). He argued that RISD’s policies on program placement and student grouping was de facto segregation based on ethnicity and race. After the federal court first ruled in favor of the school district, an appeal was filed, taking the case to the United States Court of Appeals for the Fifth Circuit. There, the ruling was made in favor of the Castañedas and a three-part assessment was created to determine whether or not schools were taking necessary actions to support English Learners, including the use of sound educational theory, expert staffing and evidence of effectiveness. The three-part Castañeda standard does present several challenges. A multiplicity of educational theories makes it possible to justify a variety of instructional methodologies. Furthermore, the time it takes for a school or district to demonstrate reasonable success or failure could mean that students spend significant time in subpar educational programming.

Plyer vs. Doe (1982)
In 1975, Texas state law withheld state education funds from students without legal documentation and allowed districts to deny enrollment to such students. A case was filed on behalf of undocumented against James Plyler, Superintendent of the Tyler Independent School District, which had attempted to charge tuition to undocumented students to make up for the missing state funds. In a 5-4 majority rule, the Supreme Court of the United States struck down the Texas statue as a violation of the 14th Amendment, arguing that all students should receive equal education and protection under the law, regardless of citizenship status. According to the court, children should not be discriminated against because of something not in their control, namely their legal status. As a result of the Plyer v. Doe ruling, schools are not allowed to ask students or their families about legal status and cannot refuse enrollment because of a lack of legal documentation.
at February 28, 2017