How Many Languages Do You Speak? 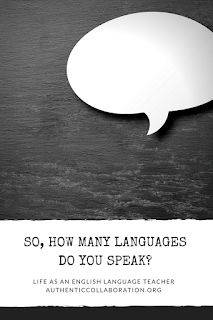 "So, how many languages do you speak?"

This questions seems to come up every time I try to describe my job as an English Language teacher to someone new. For most people, the assumption is that teachers and students must have some sort of linguistic common ground. And in some cases I do. I've studied several languages - a little bit of Spanish here, a little Greek and Latin there, and just a touch of French and Arabic for good measure. But in many cases I don't.

"How can you teach them if you don't speak their language?"

This is usually the follow-up question. And it's a good one. If I could, I would love to speak my students' language(s). Unfortunately, that's just not possible. There are literally thousands of languages in the world and my own personal teaching journey has brought me in contact with students who represent hundreds of different languages.

This is where it helps to remember that communication involves more than just language. Thoughts and ideas can also be communicated through pictures, visuals, gestures and emotions. Oftentimes, it takes more time to understand ideas without a shared language, but it is time well spent.

Back when I was teaching elementary, one students came to me with a story about a bird. He really wanted me to know what kind of bird he was talking about, but he didn't know the name in English ... and I didn't have any idea what he was trying to tell me. But I knew it was important to him.

We must have spent at least 15 minutes acting out bird flights, making bird calls and searching Google images for any leads. For anyone walking by, it probably looked like we were trying to re-enact a certain Hitchcock film. We negotiated the meaning - back and forth - until we finally figured it out. The excitement in my student's eyes when we finally got it reassured me it was worth it. Taking the time to really understand helped to build his confidence in himself and in his ability to communicate.

Being an English Language teacher means being patient. It means knowing what your students' need and figuring out ways to get creative when language isn't enough. Helping a child or an adult learn how to express themselves gives me the kind of satisfaction that money can't touch. It's not always an easy job, but I'm pretty sure I have one of the best jobs in the world. I'm looking forward to a great school year!
at August 31, 2016